Love is in the Eire 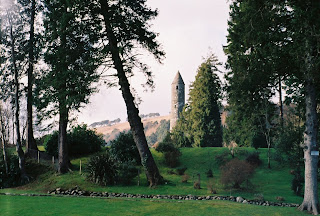 Eire or Ireland as we Americans know it is the most beautiful country I have ever seen and it is my favorite place on the planet.  If there is somewhere better, I haven’t seen it yet.  From my very first visit, I fell so deeply in love with it that I wanted to stay there forever.


It was that intense feeling of being totally and completely at peace in my life (perhaps for the very first time) that was so incredible to me.  The countryside is unbelievably beautiful with the lush green rolling hills and lovely villages and towns scattered about but it is the people that I remain so enamored with.  To say the Irish are friendly is truly an understatement.  Their warmth and generosity are something very special and unique in the world.  Just thinking of that beautiful green place fills my heart with joy!

It is very interesting to me how my bucket list has shrunk to a fraction of its former size.  I have always kept a list of places that I would like to visit.  Whenever I read an interesting article in a magazine or saw a program on television that caught my attention, I would write it down.


Long before the internet, I would call the airlines on Thursday to see if they had any cheap last minute seats – going anywhere for the weekend.  It didn’t matter if it was to see beautiful gardens in Canada or just walk on the beach in Florida, I would grab my bag and go.


Now I want to go fewer places and stay much longer.  Taking the time to relax and immerse myself in the local environment.  I don’t want to follow the crowds to the tourist attractions; I want to experience the heart and soul of where I am.
Posted by Lynn at 8:17 AM No comments:

What not to do in Paris

A couple of years ago, a friend of mine had a child who was accepted to study in France.  We thought it would be fun if we went to see him and stay in Paris for a week.  She was not an experienced traveler but I assured her that I would look out for her and we would be just fine.  Paris is a gorgeous city and I knew this would be the trip of a lifetime for her.


We decided to rent an apartment so we would have plenty of room and privacy during the trip.  That was the first big mistake – the owner of the apartment was still living there when we arrived and wanted us to share the apartment with him for the week.  I immediately said no and that we would find other accommodation – my “friend” told him it would be fine!  I was stunned and felt very vulnerable and insisted that we go to a hotel.


We found a lovely small hotel in Central Paris that would be perfect for our stay.  I did tell her (more than once) that we needed to be cautious about our belongings and personal safety while we were there.  Neither of us spoke French very well – although she thought she did and proceeded to insult almost everyone she spoke to.


As we headed out to see the sights, I told her that we needed to take all of our valuables (passports, money etc.) with us or leave them at the front desk.  I left the do not disturb sign on the door and we were on our way.  It was a lovely day and I was sure the drama was behind us and our trip could officially begin.  When we returned to the hotel someone had been in our room and gone through all of our things.  I was very surprised when she said that not only had she left all of her valuables in the room (some of which were now missing) but she had mentioned to a nice person in the hallway that we were leaving for the entire day!  To say I was surprised is an absolute understatement; this was an otherwise intelligent woman who was clearly out of her element and making both of us unsafe!


That was just the beginning; this woman was the classic American tourist.  Everything from carrying her Rick Steve’s book to wanting to go in secluded areas after dark, she was a walking target.  She grew tired of my trying to educate her on safety and ultimately went off on her own.  Fortunately, we were able to get back home safe and sound but not before we had a few more episodes – like her arguing with Customs getting back into the US.


That trip was a great example of why I travel alone.  You really don’t know someone until you have traveled with them.  Perhaps I should have titled this – who not to go anywhere with!  The ultimate lesson for me is to be far more selective about my travel companions in the future.
Posted by Lynn at 10:12 AM No comments: